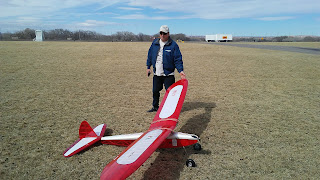 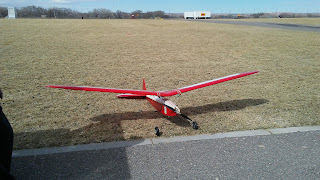 Today Richard Dick and I helped (Well, we offered what assistance we could) to Bob Galler. He maidened his MG 2 after an extensive rebuild of the wing. Bob's only flight of the morning was the result of using a 3S LiPo pack. Bob worried about that power but the big model lifted off and was going well at 3/4 throttle.

After a graceful landing, Bob admitted that he would really use a 4S pack in competition.

Congratulations, Bob. You inspire all of us.

Steve Moskal,
(AKA the Comet Kid)
Editor
Posted by Comet Kid at 1:07 PM No comments:


Well, its done, using covering materials and wood on hand. And even tho I used cap strips top and bottom I used lighter wood at the tip,  the new wing half is lighter than the old. Jim Correll would never allow that!
The flying will tell. The new wing is the far one.  Need another 4 hours on the electronics back into the fuse and its ready to fly. The weather is not, however.  We are expecting the southern end of a storm tomorrow.  But nothing like Flagstaff!! 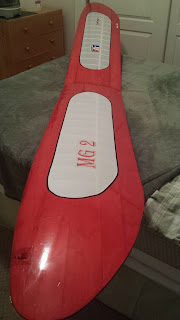 Galler Forges Ahead With His MG2 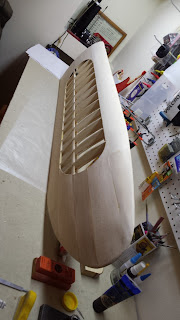 In Bob Galler's own words: "Almost ready to cover. The undercamber cap strip were side strips and took all day yesterday. Electronics to be put back in the fuselage.
Done this week for sure. Why? Bad weather."
Posted by Comet Kid at 8:18 AM No comments:

Bob Galler reports: "The lumber yard rebuild of the MG2 right wing half is well underway.  Luckily I Had Some ORIGINAL Ribs AND the, Center Section Of The Old Wing.  So The Tube locations for the joiner rods can match exactly. The left wing half had no damage. And will be used for final tube alignment. 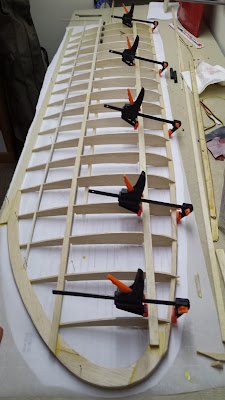