Here's the latest from Richard Dick on his Thunder King project. He's really worked on the concept of the tip panel dihedral. I measured our Miss Stick and Oly 650 and gave him my results.

In Richard's own words...

Thanks for your dihedral data from two successful models. The Thunder King was originally designed as a towline glider, like the Hover King, and did quite well in contests.

I have looked at RC-Groups comments about the adequate dihedral angle. Several people (actually more than several) referred to using EDA (Equivalent Dihedral Angle) for sizing the angle. So I looked EDA up and it is based on a plot of Moment Fraction versus Semi-span Station. The Moment Fraction is a measure relating to the rolling moment of the wing and has values of 0 to 1. Semi-span Station of 0 at the root and 1 at the tip. So I did the math using the graph and using the 16° dihedral angle and found the EDA is about 10°. EUREKA!

The 16° dihedral turns out to be about 3.75 inches per foot, which close to Thornburg's number. (Editor's Note: Richard and I consulted Dave Thornburg's Old Buzzard's Soaring Book and reviewed his dihedral rules-of-thumb.) Based on my calculation and other people's data including yours, I'm going to slant the tip panels at 16° for the Thunder King.

Attached (are photos of) the wing with both tips spaced up 5 5/16 inches. They are not glued together yet, I just wanted to see what the wing would look like first.
Richard" 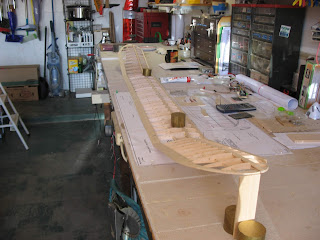 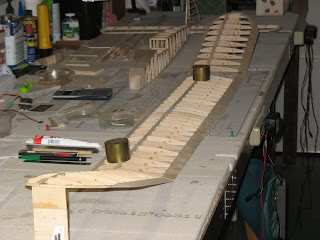 Richard Dick has been working hard to finish the Thunder King glider this spring. Here are three photos of the bare bones. We may soon see this British design fly on this side of the Atlantic. 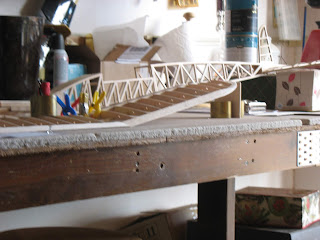 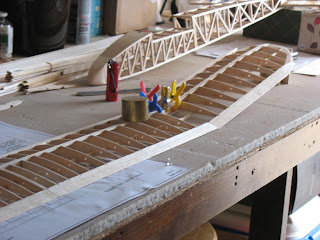 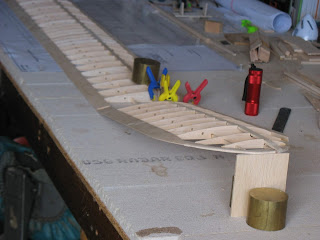